Online Opening on facebook: 10.11.2020, 7 pm
Exhibition: We will keep you up to date, currently closed
Curated by: Stefano Riba 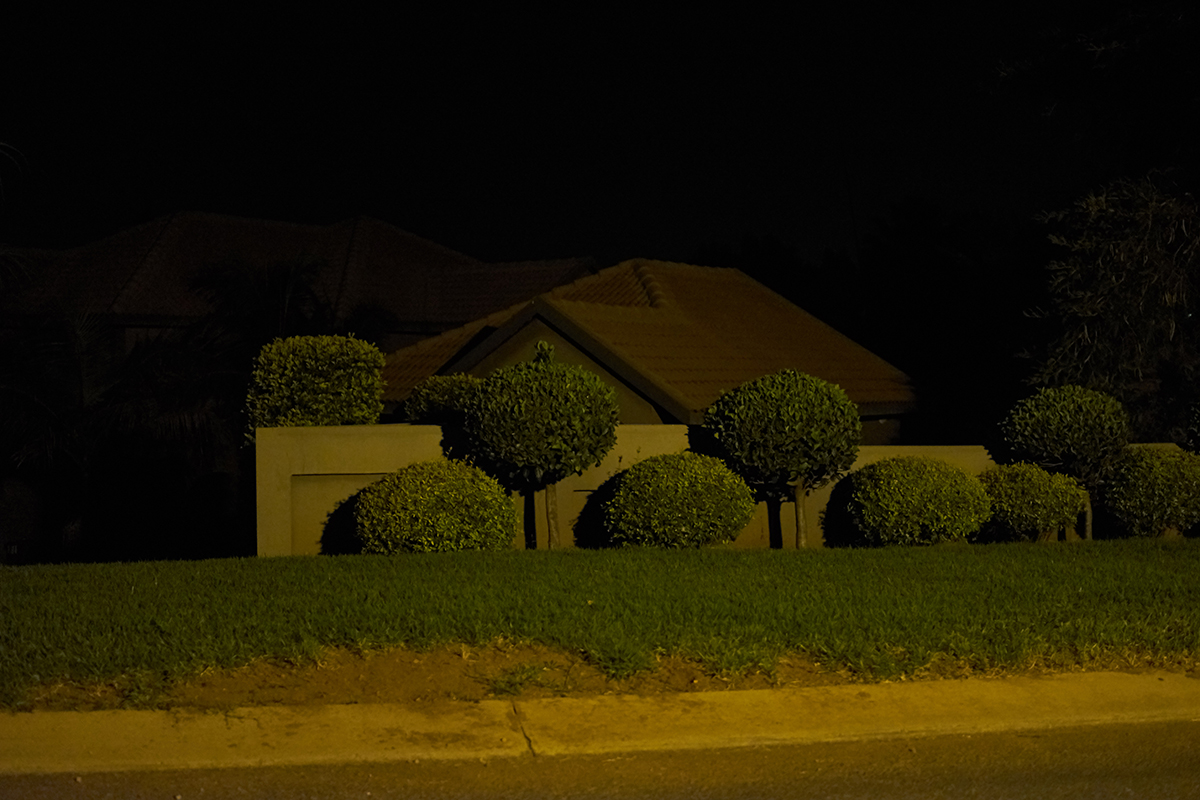 “Koloko Street” shows for the first time images inside the Silver Hills security estate in the province of Gauteng in South Africa shot by film-maker and photographer Georg Zeller. The photographic series shows the houses and streets of an urban agglomeration – one of which lent the name to the exhibition – that is surrounded by walls and electric fences, monitored by hundreds of security cameras, and manned at the entrances and inside by armed guards.

Apartheid is the Afrikaans term that defines the extremist policy of racial discrimination that has ruled the country for nearly a century. In Italian the term means separation. Silver Hills is one of the 6,500 armored neighborhoods that still today follows the principles of social and racial segregation, and applies them to urban planning and architecture, thus demonstrating the violence and the lack of inclusion and social mobility that continues to afflict South Africa. The credentials for living in a gated community is to have money. It is then necessary to sign dozens of pages of contracts of safety procedures to be maintained, the behaviors to be followed, and the privacy regulations, as well as the non-disclosure of information and images regarding the structure. Visitors can only enter with consent by the residents and thorough inspections. Everyone else is kept out.

Security estates are not only a South African prerogative, but are typical of countries where wealth is unequally distributed and society is extremely polarized, to name a few: Brazil, Mexico, Argentina, India, Israel, Indonesia, Thailand, but also the United States, Great Britain, Romania and Italy (Milan, Rome and some luxury resort areas). The inhabitants of these places want their money, comforts and access to the resources they possess to be protected from those who are outside: poor, marginalized people who are without access to welfare and therefore they are often ready to fight, steal, and kill. “Koloko Street” therefore provides a global reflection, which is not limited to a specific geographical and historical context.

And it is precisely at the present moment, in which confinement and social distancing have been imposed (and perhaps will be required again), that it is even more disturbing to reflect on the self-segregation that security estates apply not because of a virus, but for the consequences of the poor distribution of economic and natural resources: money, access to medical care, inclusion policies, water, and profit from the subsoil. Speaking of water resources, it should be remembered that, despite South Africa being a nation with dramatic drought problems, many armored neighborhoods have golf courses that each need about 2,000 cubic meters of water per day (the same that a town of 9,000 inhabitants would need). In addition, almost every home has a private swimming pool and all have gardens to water.

The houses photographed by Zeller look like bunkers, lacking any form of empathy, they resemble models of a model displaying the houses of a dystopian world that is real. “These places are not comparable to the neighborhoods of a normal city, you know your neighbors only by the brands of the cars they drive and the number of servants they can afford,” says Georg Zeller. He continues to comment, “here you don’t rely on government policies or law enforcement but put your security in the hands of private companies. It’s like living in a large, luxurious prison. The photos are taken at night to amplify the idea of ​​domestic segregation and the human presence can only be guessed from the lights on in some homes.”

In addition to the bricks, the barbed wire, the weapons of the guards, the residents of the gated communities are deprived of not only the outside world, but many freedoms and qualities: the possibility of moving freely, the possibility of choice (the colors of and the types of plants to have in the garden are indicated in the rental contract), and to be empathetic and sympathetic to others. Italo Calvino writes in the “Barone rampante”: “If you raise a wall, think about what you leave out.” A piece of wise advice that too often goes unheard.

Georg Zeller was born in Stuttgart. After his training at the ZeLIG Film School and the Hochschule der Künste in Berlin, he has been working as a Director of photography and cameraman, as well as filmmaker and author. He worked for RAI, ORF, BR, and for years curated the productions of the Documentary School of Bolzano. He also writes and translates in the field of cinema and art. After “A Second Birthday” he is now developing a new documentary project as an author and director: “Souvenirs of War”. “Koloko Street” is his first solo show.